User Experience and User Interface Design
Project Overview
My Final Year Project was focusing on tackling plastic waste issues with a human-centered design approach. After two semesters filled with research, reporting and designing, the app idea SILVA was created.
Abstract
Within recent years it is noticeable how the focus on plastic waste has increased. Social media and media coverage in general on the topics of plastic have risen and the awareness in the general public seems bigger as well. The European Union has signed off a single-use plastic ban which will become effective in 2021, banning plastic cutlery, straws, cotton buds and more completely. The human-centred design approach will be able to offer a potential solution to some of the issues with plastic that endanger our environment.
Prototype
Try the clickable mobile prototype of SILVA and check out all it's features.
Context
Currently we as a society are facing great environmental problems that are fundamentally influenced by our habits related to plastic waste. Micro-plastics are polluting the oceans and packaging materials are covering our streets. These developments have have been noticed and not only governments are trying to tackle these issues now, more and more individuals are embracing a greener lifestyle in order to make a change for the environment.
To fuel this green wave of change a human-centered design approach might be able to offer assistance.

Research
I conducted an extensive research phase in which I familiarized myself with relevant literature, analysed already implemented products and carried out empirical investigations.
The literature review helped me to pinpoint the most relevant issues - plastic packaging materials. Especially food packaging from grocery stores are cheap in production cost and have a high longevity, yet the lifespan of them from a consumer perspective is very short.
When analyzing already implemented products I was able to find digital assistants that aim at motivating and educating users on the issues with plastic waste.
As this was a human-centered design approach it was vital to carry out extensive empirical research, which was done through interviews, an online survey and observations. With the help of these research methodologies I was able to define key figures and find out about their habits and knowledge regarding plastic waste.
SILVA
University of Limerick
Sep 2019 — May 2020

Analysis
‍After conducting the initial research phase it was time to analyse the raw data. By doing so I would be able to dive into the design phase and start the iterative process which ultimately would lead to a prototype that would address the discovered issues that we as consumers have with plastic waste.
The most noteworthy categories of findings were the unawareness of environmental consequences and a noticeable lack of education on the matter. My design would have to ensure that these phenomena would be addressed.

Early Ideas
The beginning of the research phase started with a quick ideation exercise which produced two early ideas that would influence my further development and refinement of a design.
The first idea was a physical product which would put an emphasis on ambient awareness. A fish tank, containing a fake fish and a container with plastic particles would be featured in this design. With the help of a smartphone app the user would scan their shopping receipt. After analyzing the amount of plastic material in the user's shop, the app would release an according amount of plastic particles into the water, thus raising the awareness about their impact onto the environment.
The second idea was a screen-based design that included a database that could be updated and fed by users themselves in which all sorts of packaging items can be uploaded. This application would try to educate the users on a very prominent issue with plastic waste which I identified during the research phase - incorrect disposal. With the help of the smartphone's camera the packaging of a product could be identified via the bar-code and the user would receive all relevant information on how to dispose it. To further encourage a positive change, plastic-free alternatives, if available, would also be displayed. 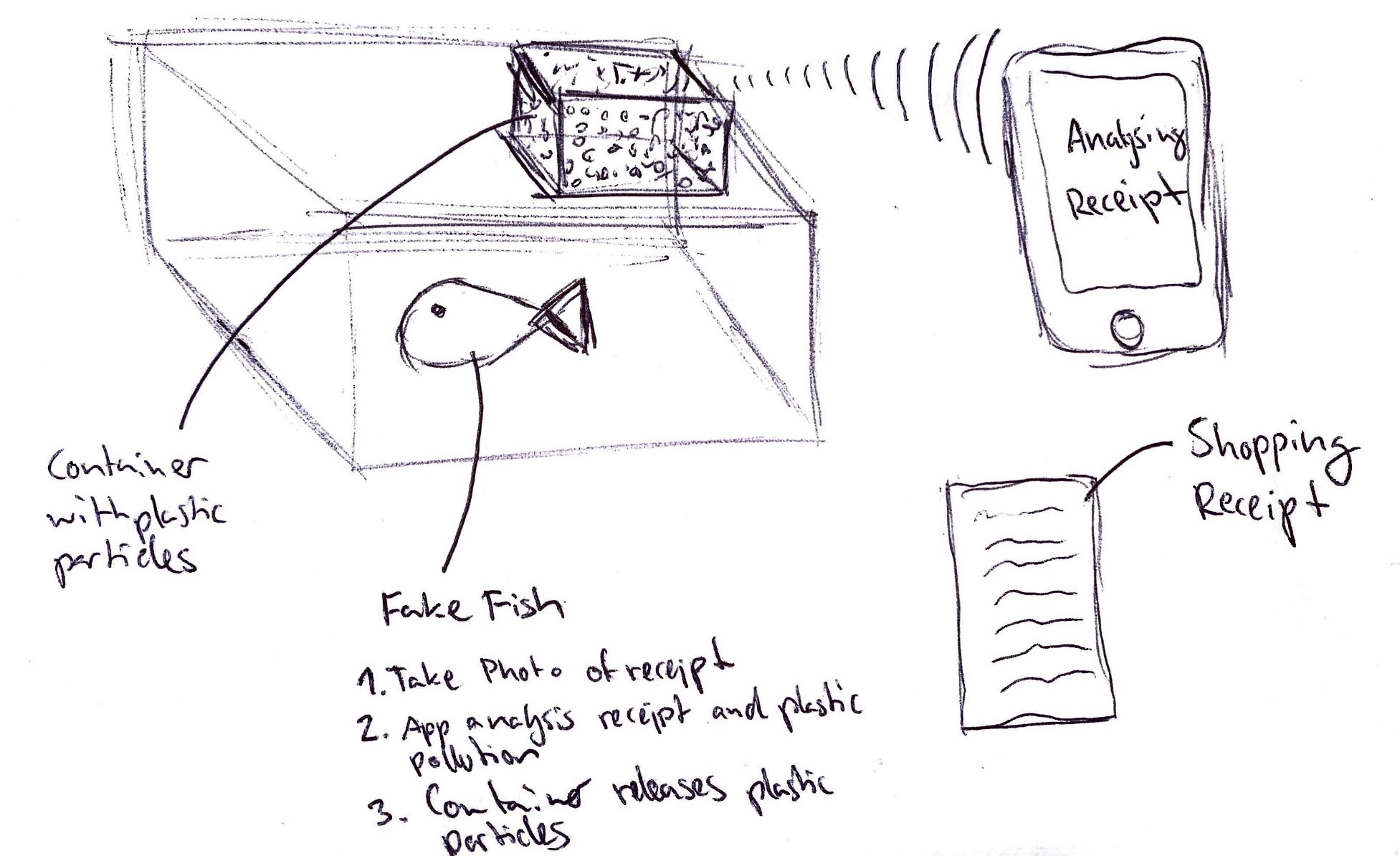 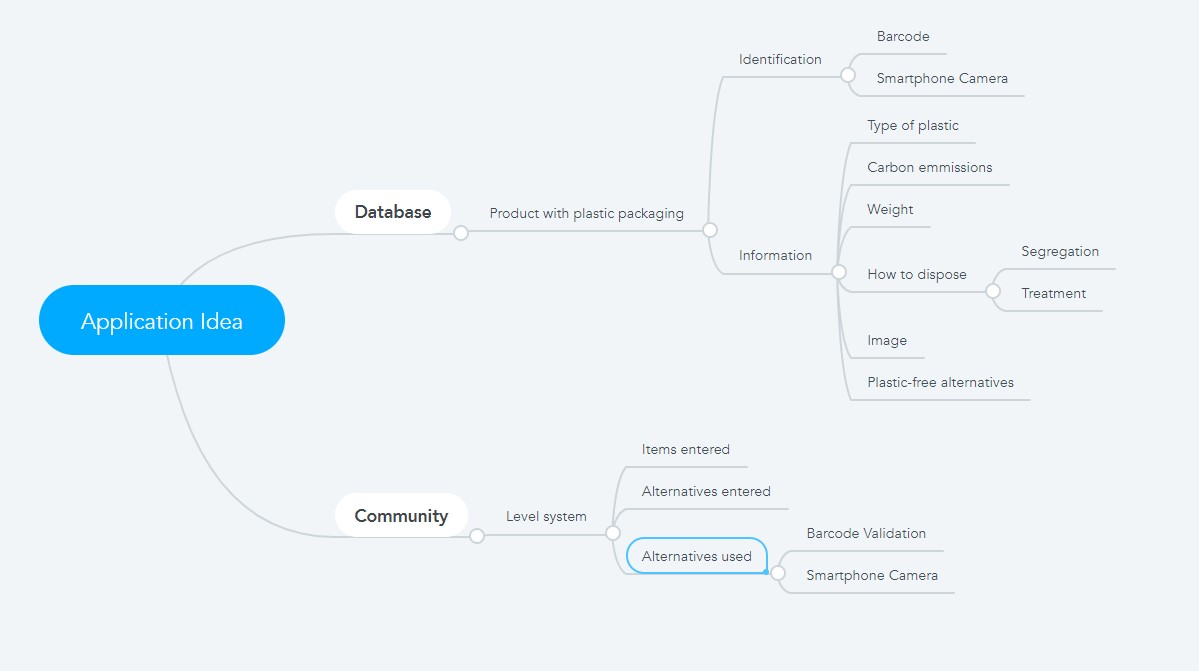 Features
‍After careful consideration I decided to play my cards right and focused on a screen-based design as I have gathered a lot of experience and confidence in this field. However, both early ideas had strong influences on the defined features for this smartphone application.
The main functionalities of the app would be identifying products and finding out about how to dispose them correctly. To ensure that this digital assistant is always up-to-date, users would be able to register products into the database. Furthermore, by offering plastic-free or eco-friendly alternatives to common products, I was hoping to encourage users to change their plastic diets.
Some other features I planned were a reward system or gamification that would encourage the users to use the application regularly and contribute to the community. I envisioned this to be done by letting the users take care of a virtual tree. This tree would be watered based on the user’s contribution and usage of the application. To ensure that users would be motivated on a long-term base to use the application I included the #Tree4Tree feature. This meant that the user could check his water progress and once he or she reached a certain level, the application would send real tree seeds of the corresponding tree to the user's address. This would bring the digital experience to life.

Paper Prototypes & Wireframes
Once the concrete features were defined I started to visualize my ideas in form of paper prototypes. These rapid sketches allowed me to quickly bring my thoughts into shape and let users test them almost instantaneously. The testing of the paper prototypes was done by completing predefined tasks. For example, I would ask the participants to scan a product in their hand and find out how to dispose it. With the help of the paper prototypes I was able to create early wireframes which allowed me to roughly test how much space I would allow every object on the screen to have. With the results of the first paper prototype and wireframes I would then be able to start iterating and produce a second version of paper prototypes before starting to dive into the high-fidelity prototype.
‍

High-fidelity Prototype
‍With the three resources of paper prototypes, wireframes and the results from the first quick user tests I was able to start designing my first digital prototype with higher fidelity. At this point in time I decided to name my application SILVA. As I included the Latin names of the trees in the descriptions I looked up the equivalent translation for forest and SILVA was the result. A nice short name that has a nice ring to it in my opinion. The name was also very suitable for the design of the logo, which is supposed to resemble a bar-code and a forest.
The clickable prototype of the application was created in Adobe XD and followed predefined user flows. Before the final submission, the prototype was used to conduct extensive usability tests.

Usability Testing
Due to the unexpected circumstances of the COVID-19 pandemic, the usability tests had to be conducted remotely. In order to get the most representative results from this user testing I had to ensure that the participants were representative of my end-users. Therefore, I tried to have a few test subjects from within the age range of students in college, but furthermore also test subjects who were working professionals within the age range of 30-40 years who might not use smartphones as much as the younger generations.
The first method of usability testing was done through Zoom calls in which the participants were sharing their screen as they completed predefined tasks with the prototype. I paid close attention to their interactions and asked follow-up questions after each task.
The second testing method was done through a user testing platform called Useberry, which allowed me to upload my prototype, define tasks and then share the test through a link. My participants would then be able to complete these tasks and generate useful insight data such as heat-maps and click-through videos of them completing the tasks.
The final results of these testing methods fed into the last iterations of the prototype before submission. 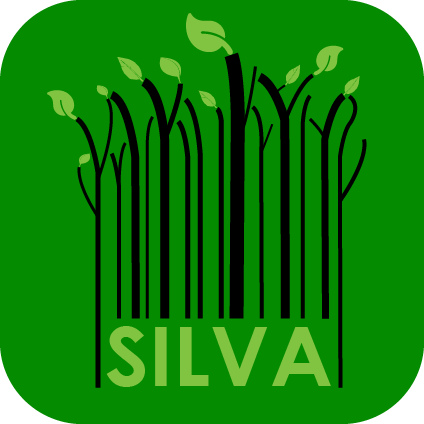 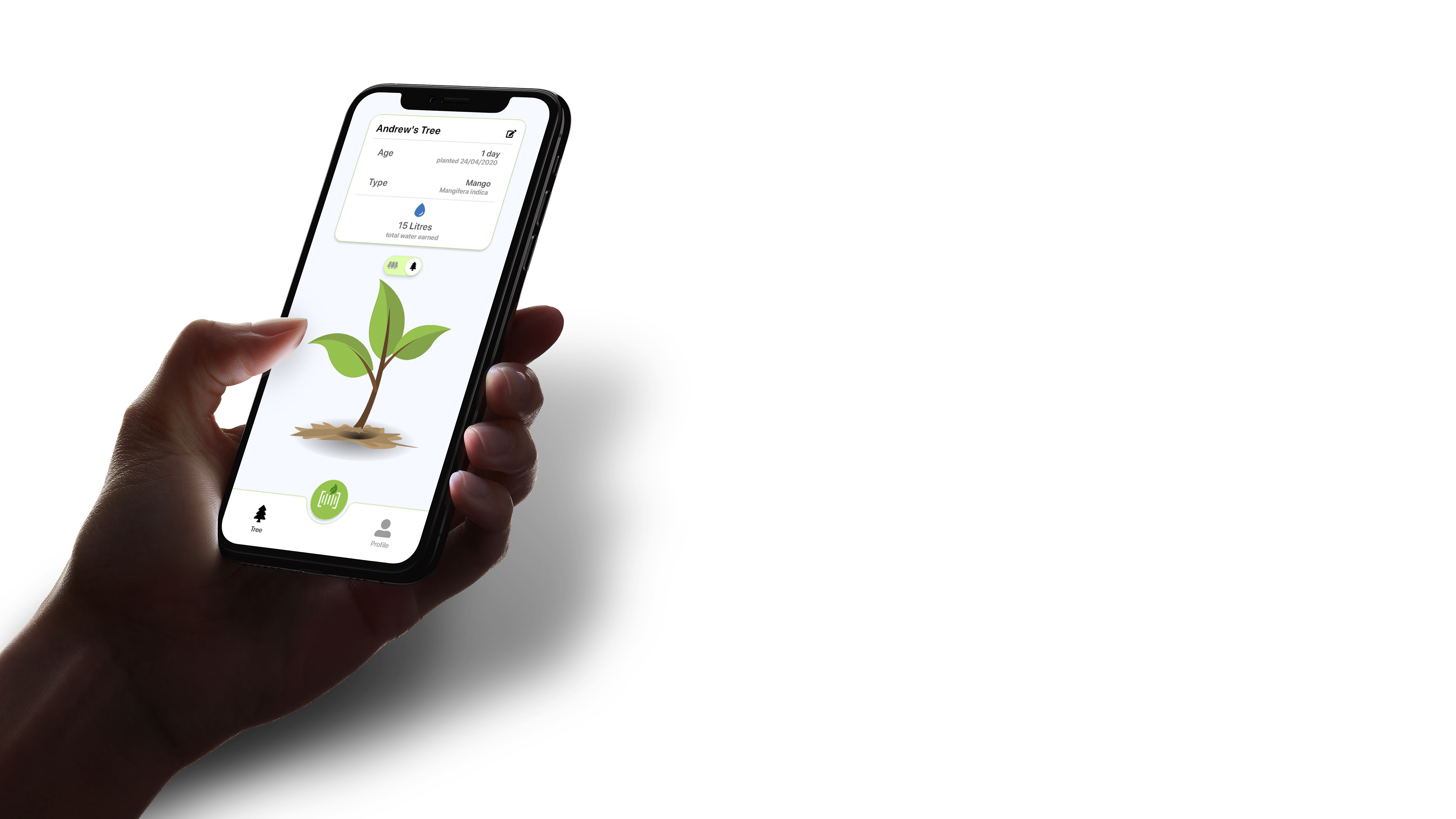 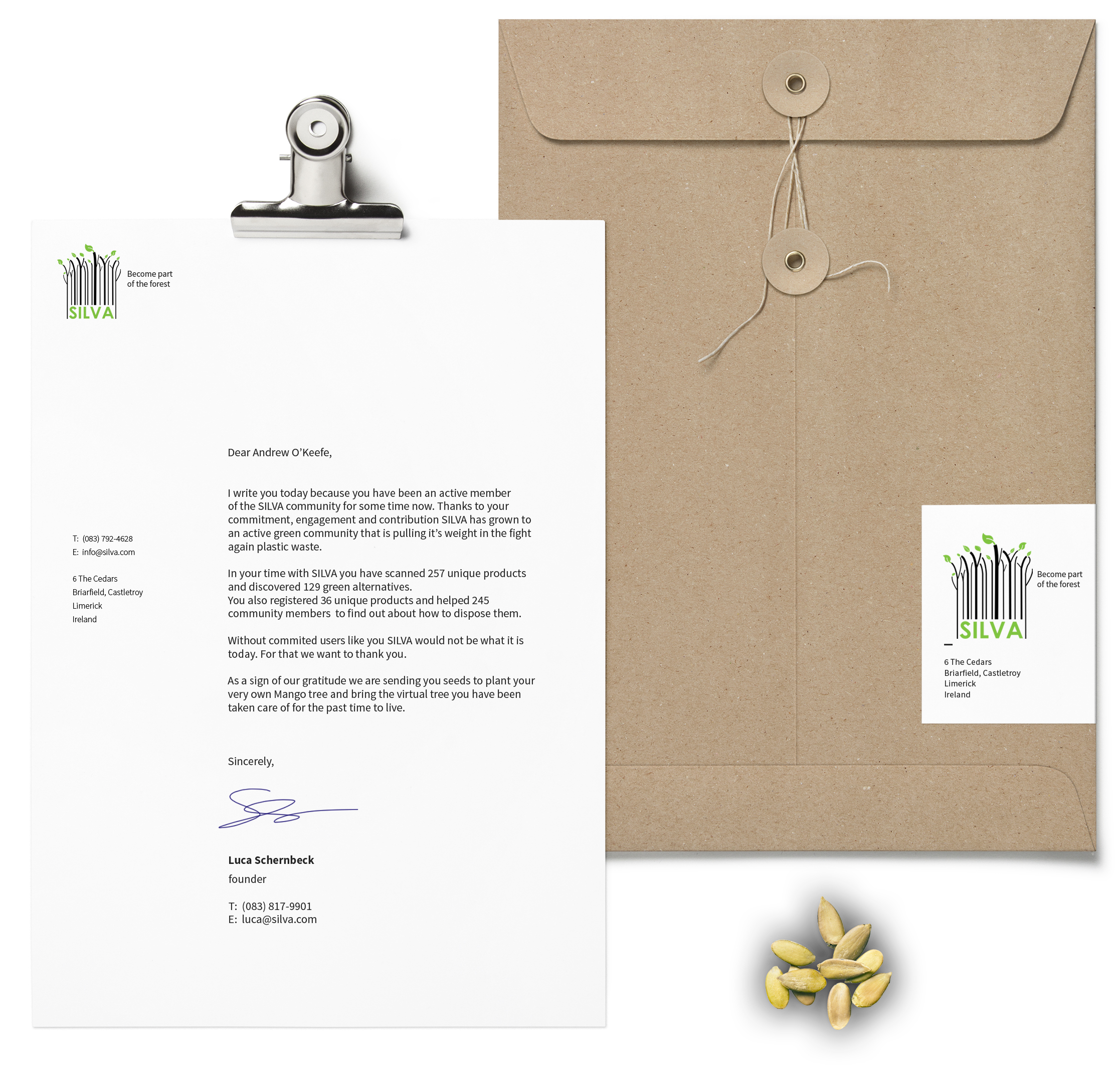